slowly rising from the dark… a severely delayed post!

It’s been ages since my latest post. I was supposed to make one 1,5 month ago but later that day, when climbing at the Colonia Puig sector in Montserrat (near Barcelona), someone smashed a window on my van, broke in and stole almost everything we had of value. Because of this I was without computer and camera for a while =no blogging.
Now I’m somehow back on track and ready to move forward. So, I’ll try to sum up whats happened in the past.
Before the incident in Montserrat I was in Sweden doing a concert with my teacher Christer Bothén in something called the ”Bucky Dome”. This is a tent they set up in the early 70’s near Moderna Muséet in Stockholm. Don Cherry used to play here at the time and now, 40 years later, it was time set it up again and fill it with music. I got the chance to play here again last weekend but more about this later.
Anyway, after all the hassle after the loss in Montserrat I couldn’t stand the area anymore so we decided to drive south. We passed Valencia and then went to the climbing area of Bovedón near Gandia. It was hot as hell but the combo with starting and ending the day IN the ocean was finally not so bad. After some free diving on the way, we arrived in Sella. Fortunately we had a window of cooler temps so climbing here finally turned out to be quite pleasant. And another thing, whats with all these lousy tops? I can’t count how many times I’ve been searching for crags because of bad directions in guidebooks… On this trip it happened again, and again..!
But after having my van in south for some time it was time to start driving back to Sweden. We stopped in BCN on the way as it was the Sonar festival that week. We also had some days in gorges du Verdon and visited my friend Bruno ”Graou” Clement. One day we borrowed his kayak and drove down to the lake and took the kayak inside the gorge to this cave. WOW -it must’ve been one of my best days of climbing in a while with swimming in the clear water in the canyon to finnish the day. There was one great looking 9a there also -I think I’ll have to borrow that kayak soon again!
We continued the drive, stopped in Sisteron for some last climbing. Then headed to St Hilare near Grenoble and the Petzl office. It was my 31st birthday and my friend Lafouche made it sure to be a day to remember: he got loads of food for the BBQ, invited friends from all over and we played music and ate until it was time to hit the sac. The next day I did started the 24 hour drive to Gothenburg. 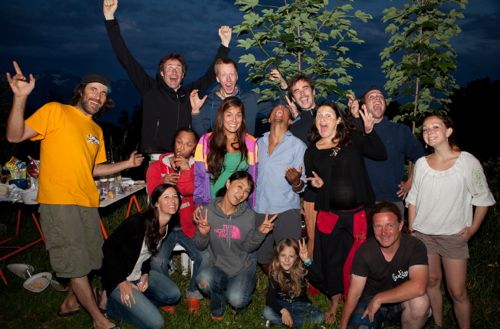 parts of the party bunch in St Hilare

I was only back in Sweden for a week before flying back south. It was time for the 10th annual Roctrip/Outdoor Games event in Millau, France. Almost everybody was there. We climbed, played music and really had a great time! 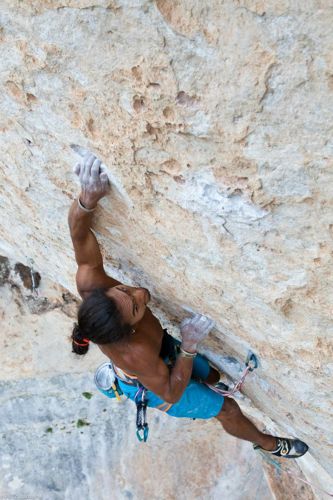 doing both le Tarn, la Jonte and Boffi during the festival. Here climbing at the magical Tennessee sector in le Tarn. 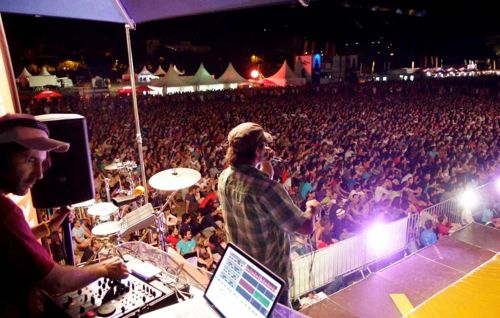 playing with Lafouche and Petitou in front of the 15000 people crowd!

After the event I drove to Ceuse for some days of climbing. I hiked up alone and immediately found a bunch of friends from all over to climb with. Some that I had not seen in 10 years! But after 8 straight days of climbing I was worked and it was time to fly back to Sweden. Back ”home” I hoped to get some rest but instead it was 2 days of intense kayaking in the Stockholm archipelago. Beautiful!

I’ve had some final gigs and right now staying in Sweden for a while, trying to stay psyched and getting ready for more this fall.

playing with Lafouche, Louis and Jorge at the OutDoor tradeshow in Germany. In the end almost everybody was dancing and screaming, much thanks to our ”go go dancer” Daila Ojeda! 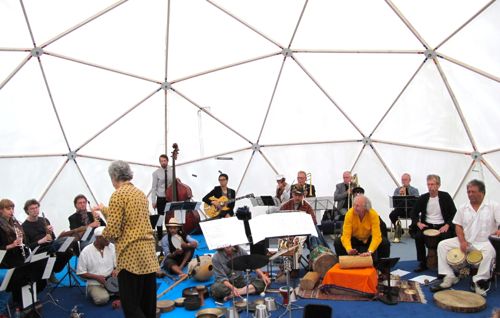 my last gig to date. Straight from the airport to this gig at the Bucky Dome. With the Go Organic Orcestra conducted by legendary, NYC based percussionist and composer Adam Rudolph.